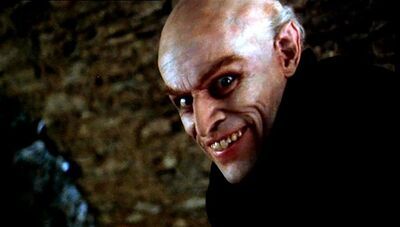 F.W. Murnau’s “Nosferatu: A Symphony of Horror” (1922) is regarded as one of the greatest silent horror films for many good reasons, and one of them is the striking appearance of its titular character. Although the film itself was the unauthorized film adaptation of the vampire novel Dracula by Bram Stoker, Murnau and his leading actor Max Schreck created with “Nosferatu” one of the creepiest vampire characters in movie history.

Inspired by the undeniably vivid and striking appearance of Schreck in “Nosferatu,” E. Elias Merhige’s 2000 film “Shadow of the Vampire” attempts to develop one darkly amusing premise: what if Murnau actually hired a real vampire as his leading actor? This sounds pretty preposterous to say the least, but the movie handles this utterly unbelievable premise as seriously as possible for deadpan, one-joke horror comedy. The overall result is further enhanced by another memorable vampire performance which deserves to be compared with Schreck’s in the 1922 movie.

At first we observes the ongoing filmmaking process of Murnau, played by John Malkovich, and his cast and crew members in Berlin, 1921. While those financiers of his have been rather nervous about the production, Murnau is quite confident about completing the production according to his grand vision, and his cast and crew members dutifully follow his direction even though they are not so sure what their movie is about. Once their job at the studio is done, they plan to shoot the rest of the film at a number of outdoor locations selected by Murnau in advance, but, to their confusion, they are not told much about how production will take place at these locations.

Above all, they have not yet met their lead actor. All they know about Max Schreck is that he’s very, very, very serious about playing his role as realistically as possible, and they become all the more curious about him as they later go to their first outdoor location which happens to be located in Czechoslovakia. According to Murnau, Schreck has already been there for a while in order to be immersed more into the mood of the location, and it seems the location is indeed an ideal place for that. For example, the old inn in which Murnau and his cast and crew members except Schreck are going to stay has a shabby but authentic sense of history and superstition. Using the inn for shooting several scenes, Murnau is willing to hire several local people just for the extra authenticity from their mere presence.

When Schreck, played by Willem Dafoe, finally appears in front of everyone for shooting his first scene in the film, he does not disappoint Murnau and his cast and crew members. As a matter of fact, he looks so eerie and disturbing right from the beginning that nobody complains much about his rather eccentric conditions. He wants to shoot his scenes only during nighttime, and Murnau emphasizes to others that Schreck does not need any makeup because he always prepares himself in advance. Regardless of whether the camera is rolling or not, Schreck is always supposed to embody his character, and this professional commitment of his must always be respected.

The movie does not hide Schreck’s true identity and his unspeakable nature at all, and that’s where the dark fun comes from. It soon turns out that Murnau made a heinous deal with Schreck to make him the leading character, and Schreck is already quite excited about what he’s going to get once his last scene is shot, though he still cannot help but driven by his insatiable thirst for blood. In fact, he has already been feeding on one of the key crew members, and this surely exasperates his director a lot (“Why him, you monster? Why not the … script girl?” “Oh. The script girl. I’ll eat her later.”).

As Murnau and Shreck are constantly engaged in their morbid tug-of-war in front of and behind the camera, the screenplay by Steven Katz makes an interesting juxtaposition of vampirism and filmmaking besides becoming a deranged tale of artistic ambition and exploitation. While Schreck can be regarded as your typical troublesome star actor, Murnau comes to us as your average megalomaniac movie director willing to do anything in the name of art. And I am sure there are millions of professionals in the movie business who will see a lot of themselves from what other characters around Murnau and Schreck have to endure and suffer. After all, the essence of filmmaking is sort of sucking the life of whatever is happening right in front of the camera and then immortalizing it film, and even Schreck shrewdly recognizes this aspect when he has another argument with Murnau at one point. After watching the movie, you will probably think twice about how some famous filmmakers like David Fincher or Stanley Kubrick tend to shoot the same scene more than 100 times.

Because many real-life characters in the story except Murnau are quite unknown to many of us in comparison, the movie freely pushes its story premise while also sticking close to its original inspiration. Besides inserting a number of key shots from “Nosferatu,” “Shadow of the Vampire” also recreates several other memorable moments of “Nosferatu” as Murnau and his cast and crew members keep making their film despite a series of unfortunate incidents. When Fritz Arno Wagner (Cary Elwes) arrives later in the story as the new cinematographer for Murnau, things get rolling more smoothly than before, and their leading actress Greta Schroeder (Catherine McCormack) finally appears. Despite a little personal problem of hers, this young and beautiful actress is ready for her closeup, while having no idea on what her director is going to do to her during the shooting of her last scene.

Heading toward its inevitable finale a bit too hurriedly during its third act, the movie stumbles more than once, but it still holds our attention thanks to its palpably spooky atmosphere generated by Merhige’s skillful direction. He and his cinematographer Lou Bogue fill the screen with a number of details to be appreciated by audiences familiar with “Nosferatu,” and the melancholic score by Dan Jones subtly suggests a darkness hovering around the characters in the film while occasionally accentuating several impressive moments. One of such moment is a surprisingly poignant scene where Schreck unexpectedly gets what he has yearned for many centuries while playing a bit with a movie camera. This indelible moment leaves a much more powerful impression than a similar one in Neil Jordan’s “Interview with the Vampire” (1994).

It goes without saying that the movie lives and dies with the unforgettable performance by Dafoe, who deservedly received an Oscar nomination for his work here. With his sharply gaunt appearance, Dafoe is born to play devilish figures to say the least, but he goes further here to fully immerse himself into his character, and he gives us a chillingly grand performance to be savored in many aspects. Though deliberately exaggerated at times to our amusement, he never overlooks his character’s sheer depravity, and he also somehow earns our pity as ably conveying to us his character’s remaining humanity. When Schreck happens to discuss a bit with two other characters from Stoker’s novel, Dafoe and the movie delve quite deep into the misery and despair of being a vampire for centuries.

Although Dafoe virtually steals the show, the other main performers in the film are also wonderful in their respective roles. Murnau in real life was reportedly actually quite nice and sensitive, but Malkovich is often fun to watch while looking as smug and arrogant as demanded, and he and Dafoe complement each other well. As Murnau’s ever-suffering cast and crew members, Cary Elwes, Eddie Izzard, John Aden Gillet, and Udo Kier are enjoyable in their colorful supporting performances, and Catherine McCormack brings some jolliness to the film before her character belatedly comes to realize the terrifying fact behind shooting her last scene.

Although the movie could push its story promise further for more fun and intrigue in my humble opinion, “Shadow of the Vampire” is still a very compelling work in addition to being one of better vampire films during recent years. It’s a bit of a shame that Merhige mostly stepped away from filmmaking after his next feature “Suspect Zero” (2004), but he gave us one excellent horror movie to remember at least. “Shadow of the Vampire” will continue to be regarded as one of the biggest highlights in Dafoe’s long and illustrious career.

No comments to show.